TREVOSE, PA – June 29, 2018 – StoneMor Partners L.P. (NYSE: STON) (“StoneMor” or the “Partnership”), a leading owner and operator of cemeteries and funeral homes, today provided preliminary and unaudited financial results for the 2017 fourth quarter and full year. The Partnership continues to work with its independent public accountants to complete the audit of its financial statements for the year ended December 31, 2017. As a result, the information herein is subject to change, and those changes could be material.

The Partnership remains committed to filing its Annual Report on Form 10-K for the Fiscal Year Ended December 31, 2017 (the “2017 10-K”) with the Securities and Exchange Commission (the “SEC”) as promptly as practicable, but does not anticipate that it will be able to do so by the date required under its revolving credit facility. The Partnership has communicated with its lenders that it will be seeking a waiver or other relief to extend the time for filing the 2017 Form 10-K and expects to seek a further extension of the time for filing its Report on Form 10-Q for the Fiscal Quarter Ended March 31, 2018.

StoneMor conducts its evaluation of goodwill impairment on an annual basis and noted it has recorded a material, non-cash goodwill impairment charge of $45.6 million related to its funeral home operations. Consideration was given within the analysis of the funeral home operations reporting unit to the changes made during the year to the pre-need sales funding structure, changes in operating unit cost structure, erosion of market capitalization and achievability of the reporting unit's forecasted EBITDA margin relative to its historical operating performance. The Partnership calculated that the fair value of its funeral home operations reporting unit did not exceed its carrying value and accordingly, was required to record a loss on impairment for the full amount of reporting unit goodwill. The Partnership does not expect the impairment charge to have any impact on future operations or to affect its liquidity, cash flows from operating activities, or compliance with the financialcovenants set forth in its credit facility.

Leo Pound, StoneMor’s Interim Chief Executive Officer commented, “Our financial results for the fourth quarter and full year, while preliminary and unaudited, are consistent with the message we communicated in our third quarter financial report-- that the business is stabilizing. Obviously our goal is to be able to report improved financial performance, but we are at the end of year-one of a three-year turnaround process. We have not yet seen our ongoing restructuring efforts fully reflected in the financial results, although we are seeing some encouraging data points, such as a slight improvement in GAAP revenues, some growth in preneed cemetery billings, and an increase in the average value of our preneed contracts. “Operating performance for 2018 should benefit from further improvement in sales, aided by price increases put in place during the fourth quarter of 2017, as well the reduction of non-recurring costs and other cost reductions we have undertaken in 2017 and will undertake during 2018. Our newly amended credit facility establishes a framework in which we can work to reduce leverage to levels that will allow us to grow the company again in measured steps. As reported in connection with the recent amendment of our credit facility, we were required to file the 2017 Form 10-K on or before June 30, 2018 and we are required to file our first quarter Form 10-Q no later than 60 days after the filing, and our Form 10-Q for the quarter ending June 30, 2018 no later than 105 days after the same filing. We are talking with our lenders to obtain additional extensions of the deadline for filing the 2017 Form 10-K and our first quarter Form 10-Q. As suggested by the amendment that allows us to deliver our second quarter financial statements to our lenders within 105 days after we file our 10-K, we do not expect to file our second quarter Form 10-Q by the SEC filing deadline of August 9, 2018. We have more work to do, but we believe we've made important progress.”

The financial results presented in this release are preliminary and unaudited, and these results are subject to change upon completion of the Partnership’s Form 10-K for the period ending December 31, 2017, including the effects of any subsequent events and the audit by StoneMor’s independent registered public accounting firm of the Partnership’s 2017 consolidated financial statements. These preliminary unaudited results include calculations and projections that have been prepared by StoneMor’s management, and there can be no assurance that StoneMor’s actual financial results will not materially differ from the preliminary unaudited financial data presented herein. In addition, the preliminary unaudited financial data presented here should not be viewed as a substitute for the full financial information prepared in accordance with accounting principles generally accepted in the United States of America (“GAAP”), which will be filed with the SEC at a later date. Please see the “Cautionary Note Regarding Forward-Looking Statements” section of this press release for further information.

StoneMor is the only publicly traded death care company structured as a partnership. StoneMor’s cemetery products and services, which are sold on both a pre-need (before death) and at-need (at death) basis, include: burial lots, lawn and mausoleum crypts, burial vaults, caskets, memorials, and all services which provide for the installation of this merchandise. For additional information about StoneMor Partners L.P., please visit StoneMor’s website, and the investors section, at http://www.stonemor.com.

Certain statements contained in this press release including, but not limited to, information regarding 2018 operating performance, the Partnership’s expectations regarding the impact of the goodwill impairment, efforts to obtain waivers or other relief from the Partnership’s lenders and the expected timing of filings, are forward-looking statements. Generally, the words “believe,” “may,” “will,” “estimate,” “continue,” “anticipate,” “intend (including, but not limited to StoneMor’s intent to maintain or increase its distributions),” “project,” “expect,” “predict” and similar expressions identify these forward-looking statements. These statements are made pursuant to the safe harbor provisions of the Private Securities Litigation Reform Act of 1995.

Forward-looking statements are based on management’s current expectations and estimates. These statements are neither promises nor guarantees and are made subject to certain risks and uncertainties that could cause actual results to differ materially from the results stated or implied in this press release. StoneMor’s major risks are related to uncertainties associated with the cash flow from pre-need and at-need sales, trusts and financings, which may impact StoneMor’s ability to meet its financial projections, service its debt, pay distributions, and increase its distributions, as well as with StoneMor’s ability to maintain an effective system of internal control over financial reporting and disclosure controls and procedures.

StoneMor’s additional risks and uncertainties include, but are not limited to, risks and uncertainties related to thefollowing: the consequences of the Partnership’s delinquent filing of its 2017 Form 10-K and its Quarterly Report on Form 10-Q for the fiscal quarter ended March 31, 2018 (the “First Quarter 10-Q”) and the anticipated delinquent filing of its Quarterly Report on Form 10-Q for the fiscal quarter ending June 30, 2018 (the “Second Quarter 10-Q” and, collectively with the 2017 Form 10-K and the First Quarter 10-Q, the “Delinquent Reports”), including that the U.S. Securities and Exchange Commission could institute an administrative proceeding seeking the revocation of the registration of the Partnership’s common units under the Exchange Act, and that the Partnership remains delinquent in its required filings with the New York Stock Exchange (“NYSE”) and could ultimately face the possible delisting of its common units from the NYSE; the existence of a default under the Partnership’s amended credit facility when the 2017 10-K is not timely filed and the potential for an additional default if either the First Quarter 10-Q or the Second Quarter 10-Q is not filed within specified periods or the indenture governing its senior notes if the Partnership fails to the Delinquent Reports within 120 days after notice from the trustee under the indenture; the Partnership’s ability to obtain relief from its lenders under its amended credit facility or the indenture governing its senior notes, the terms on which such relief might be granted and any restrictions that might be imposed in connection with any relief that might be obtained; uncertainties associated with future revenue and revenue growth; uncertainties associated with the integration or anticipated benefits of recent acquisitions or any future acquisitions; StoneMor’s ability to complete and fund additional acquisitions; the effect of economic downturns; the impact of StoneMor’s significant leverage on its operating plans; the decline in the fair value of certain equity and debt securities held in StoneMor’s trusts; StoneMor’s ability to attract, train and retain an adequate number of sales people; uncertainties associated with the volume and timing of pre-need sales of cemetery services and products; increased use of cremation; changes in the death rate; changes in the political or regulatory environments, including potential changes in tax accounting and trusting policies; StoneMor’s ability to successfully implement a strategic plan relating to achieving operating improvements, including improving sales productivity and reversing negative trends in costs of goods sold, certain expenses, cemetery billings and investment income from trusts, strong cash flows, further deleveraging and liquidity enhancement; StoneMor’s ability to successfully compete in the cemetery and funeral home industry; litigation or legal proceedings that could expose StoneMor to significant liabilities and damage StoneMor’s reputation, including but not limited to litigation and governmental investigations or proceedings arising out of or related to accounting and financial reporting matters; the effects of cyber security attacks due to StoneMor’s significant reliance on information technology; uncertainties relating to the financial condition of third-party insurance companies that fund StoneMor’s pre-need funeral contracts; and various other uncertainties associated with the death care industry and StoneMor’s operations in particular. 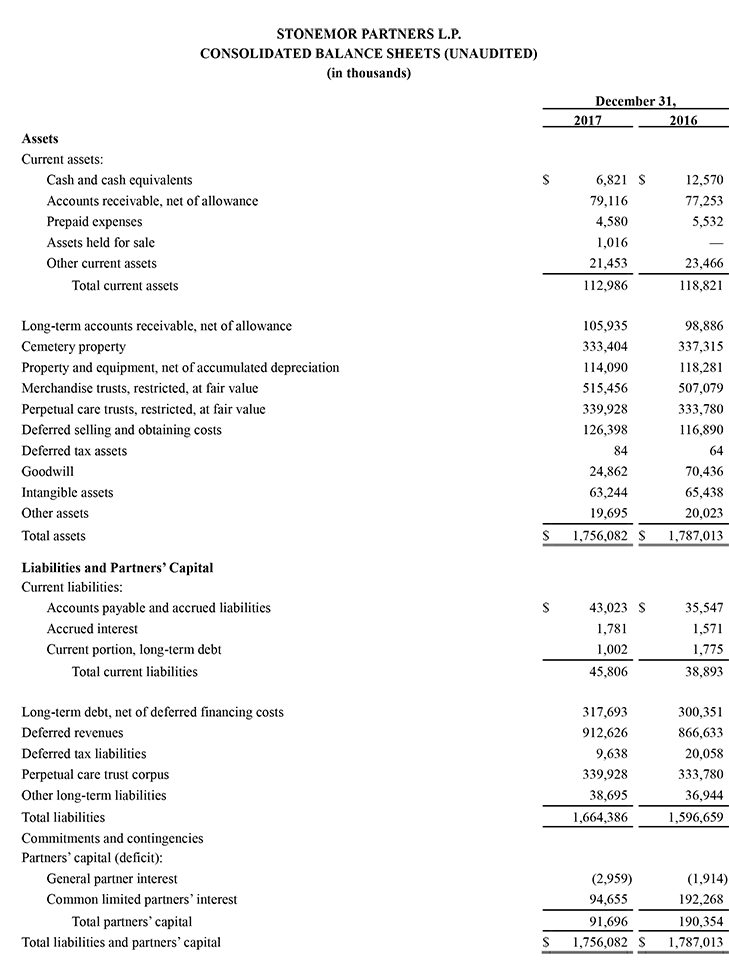